Veel van Marlaines invloeden komen van poppenspel, de illustraties van Arthur Rackham, het theater. “Dolls are what I do best. I make dolls because they are so close to human beings. You really can get touched by them. I try to create a fantasy world based on human characters and anatomy but everyone can imagine their own story for my dolls or my doll-animal combinations. I consider my dolls three-dimensional illustrations of imaginary stories. My figures are independent, introverted and (mostly) intelligent. They are meant to make people smile. In my opinion not only the faces give expression, but the hands as well. My guide is to keep it simple and don’t stick to conventions.”

Since childhood Verhelst saw her future as a painter or journalist. “I was always creating, writing poems, making doll clothes, playing with clay, so my parents sent me to art school.” She tried everything in the beginning, both technical and artistic disciplines at the same time developing her own methods as most ingenious artists do. She began dollmaking after her education as an illustrator at Art Academy in 1975.

“One of my teachers, a writer and illustrator of children’s books made dolls for fun, for her children to play with. I will never forget the day she showed us those dolls. I was fascinated. Though the teacher was not a professional dollmaker, the dolls showed the same silent character as her drawings. They were simple dolls, with a strong expression.” remembers Verhelst. “Though I never saw those dolls again, they are always in my mind when making my own dolls. They are still my source of inspiration for keeping it simple. These dolls have had a great influence on my work. “ 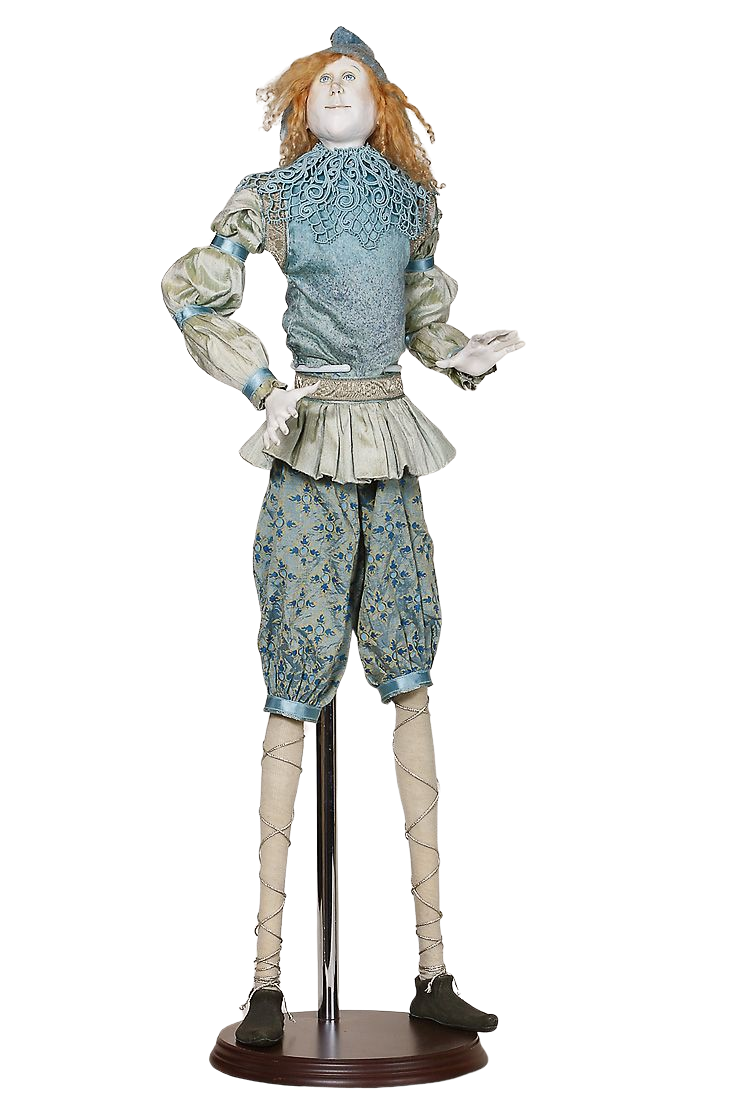 Verhelst works in several mediums. Mostly her pieces are sculpted directly of porcelain, but sometimes air-drying clay is used for the legs of a standing doll. Animals are modeled from papier mâche around a base of Styrofoam. “After creating a doll in my head, I sometimes hate to make the piece because it already exists perfectly in my head, could still be a masterpiece, and it feels like making is only craft, not creative anymore.”

Sculpting and painting are Verhelst’s favorite aspects of the creative process. Painting brings the piece to life and possibly changing its character. Finishing touches might take her weeks of adding and eliminating. “Less is more” is her maxim for the final result.

“I sometimes hate to make the piece because it already exists perfectly in my head, could still be a masterpiece, and it feels like making is only craft”

Verhelst is “mom” to a very active family. After finding her “Prince”, many years ago, three very active children were created. Two follow artistic inclinations, another is inclined toward philosophy. Besides doll making Verhelst worked her whole life with textiles and is still involved in the beautiful Museum of Textiles in her hometown. The prolific artist has also written two books: Fantastische Sprookjespoppen (Fantastic Fairy Tale Dolls) and Poppen en Beesten (Dolls and Animals).  Both are out of print now but still available second hand. Though the language of the books is Dutch the photos and drawings are easily understood.

Verhelst became a member of NIADA in l999. She finds that NIADA gives her self-confidence, the opportunity to meet colleagues and other people. She travels extensively exhibiting and teaching workshops.

Marlaine Verhelst is a world renowned artist based in The Netherlands. For over 40 years, Marlaine has been one of the world’s leading doll-artists.

Marlaine is a proud member of The National Institute of American Doll Artists, a worldwide organization of doll artists, supportive patrons and friends whose purpose is to promote the art of the original handmade doll.